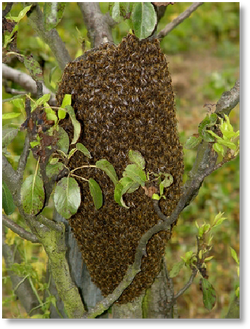 A swarm of bees is typically a new colony of bees in the process of searching for new location to establish a nest. The swarm is normally composed of a queen, several thousand worker bees and a number of drones.

A swarm is a result of the natural process of expansion by bees with swarms leaving established nests or hives to set up home elsewhere. Bees have been doing this for millions of years.

A swarm of honey bees can vary in size and be from something like 2 or 3 thousands bees to 20 or 30 thousand. The number of bees in a swarm tends be related to the size of the original colony from where it has come and how many swarms have left the colony before. The first swarm to leave the hive (the Prime Swarm) is the largest and can contain 50-60% of all the workers. The prime swarm is often followed by one or more secondary swarms (casts) each with a smaller number of worker bees. Eventually, the original colony may be left with only 10-25% of the bees it started with.

The swarm tends to go through a few different phases whilst it finds a new home. The queen is often forced out of the hive by the workers, who guide her to an appropriate local resting place such as a nearby fence post, tree or hedge. The workers and drones follow the pheromones of the queen and the swarm undergoes a period of settling with more bees joining from the original colony. Lots of bees will be flying for some time while the swarm clusters around the queen.

Once a scout bee has found a suitable location, it will perform a dance giving details of the location to the other bees. Additional scouts fly off to investigate and report back with their own dance. The strength of the dance (in terms of numbers of bees performing it and strength of the movements in the dance) determine whether or not the swarm flies off to the newly found location. Once they have decided, the bees fly off, leaving little trace behind them.